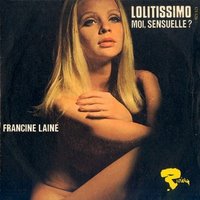 More André Popp related-stuff soon. And oh, a Gitte LP and a cupcake to those who can find other tracks with her! 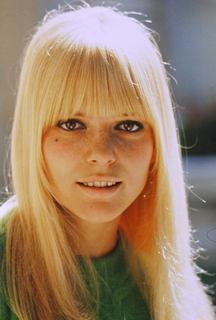 Parisian Pop Princess France Gall would regularly record in Germany from 1966 to 1972, in particular with the composer and orchestrator Werner Müller. She had a successful German career with songs by Horst Buchholz and Giorgio Moroder. For all her German success, many Germans would believe for a long time that Gall was one of their own.

Here are some of my favorites... 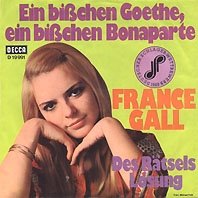 Plus: Her German version of Poupée de cire, poupée de son here
Posted by Dansmoncafe at 7:46 AM 6 comments: 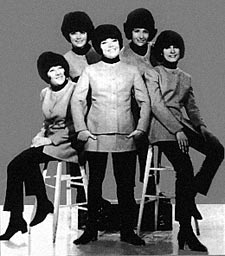 The group was formed in February 1964 by Denise Payette who told a friend that she would find girls to form an all female equivalent of The Beatles. The other members were: Claudette Faubert, Hélène Duguay, Mimi Jourdan and Claire Fugère who were all experienced musicians. Their first show was the 17 August 64. Unlike most girl groups of the period, these girls played their own musical instruments. Tragically, on the way to their last show in Canada before heading off to Paris for a major gig at The Olympia, a car crash claimed the lives of two of the girls in the band. 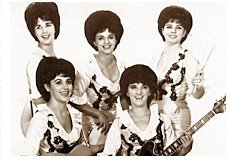 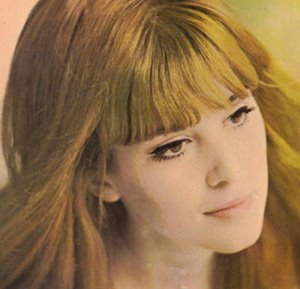 Born in 1947, Géraldine, after being member of The Djinns, got out a first solo 4 title EP in 1966 on Polydor. The same year, her song "Which heart will you break" wasn't selected to represent France at the Eurovision. But at the Lugano preselection on January 21, 1967, she got that song representing Switzerland at the Eurovision Song Contest in Vienna on April 8. She would get 0 points for a 17th place. But considering the studio version of "Which heart will you break" on the second Polydor EP, it is absolutely magnificent and would totally have deserved to win the contest. So what happened in Vienna that April 8, 1967 ? Mystery... An hypothesis would be a failed live performance. Last but not least, the official orchestra that was accompanying all the artists was rubbish, not at all adapted to pop music. We can tell this by the dreadful orchestral version of a pathetic Serge Gainsbourg song, "Boum Badaboum", interpreted by Minouche Barelli who represented Monaco. Géraldine got out at least a third 4 titles EP in 1968, before we loose all trace of her. We don't know her last name and even if she's still alive. All information is welcome. So we stay with that magic 1967 EP, containing also the song "Springtime snows", whose lyrics were written by the Swiss singer Jean Charles, who would become later a famous radio & TV humorist. Beyond the outdated grace of the melody and the voice, the typical 1967 French pop sound brings a peculiar "Zeitgeist" to the whole, inimitable, with nice heavy drums that conserved a slight metallic 1965 peps.
From the dictionary "Les Dinosaures du Rock".

I found a nice Ebay store with a French Freakbeat & Lolita section.
Anyone knows the email to Simon @ Yeye girls website? The email posted on the site, dosn't seem to work..
Posted by Dansmoncafe at 10:46 AM 5 comments: 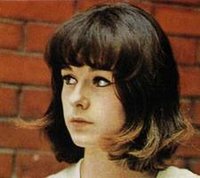 Real name: Evelyne Courtois
Evelyne's music career started in 1964 with one of the only French all-girl bands, Les Petites Souris (the Little Mice). The band recorded one EP in 1965 before splitting. Adopting her stage name from Tom Jones's song: "What's new Pussy Cat" and teaming up with ex-Pingouins drummer, Gerard Huge, Evelyne recorded a mixture of R&B covers and original songs between 1966 and 1969.

Buy album
Posted by Dansmoncafe at 11:26 AM 5 comments: 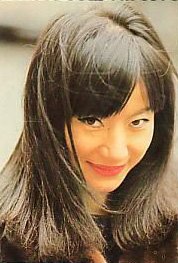 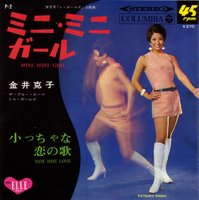 Posted on @ Splendida
Posted by Dansmoncafe at 9:31 AM 4 comments: 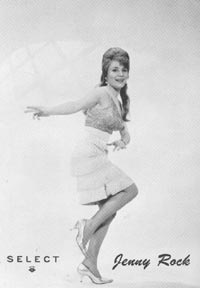 Quebec yé-yé girl Jeannine de Bellefeuille aka Jenny Rock, was born on November 10, 1946 in Saint-Hyacinthe.
She made her career mainly between 1965 and 1969.
In 1959, she interpreted the successes of Elvis Presley with the troop of Jean Grimaldi. She also took part in the musical review "Rock'n'roll Baby Rock'n'roll" with the National Theatre in Montreal. Producer John Ramming of the Sélect company saw her and gave her a contract. In 1963, she had her first success with "Donne-moi ta jeunesse", it was however "Douliou douliou Saint-Tropez" that became her breakthrough. Jenny Rock leaved Sélect in 66' for the company Apex, and had several successes like "Les Sloopy, Viens Danser, Noir C'est Noir". She disappeared from the scene at the end of the sixties.

Posted by Dansmoncafe at 5:41 AM 4 comments: 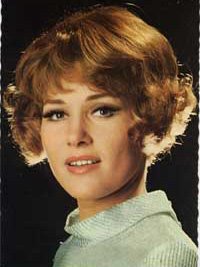 Rika Zaraï, (real name Rika Gussmann) was born on February 19, 1939 in Jerusalem in Palestine.
The Israeli singer recorded in French, Hebrew, Italian, Spanish and German.
She was performing in cabarets and theatres, singing songs translated from French classics like Trenet, Greco, Aznavour or Brassens. This is how, one day, she got spotted by a producer who asked her if she would be interested in performing at the Olympia in Paris.To her, a young budding Israeli singer, who so admired French music, it was truly a dream come true! The producer told her to go and see Bruno Coquatrix on his behalf, and, on that one recommendation, she decides to leave for Paris and for glory, with her child, still a baby, a return ticket, and 100 US$....Read the interesting biography

PS.....I'm looking for these songs, if you have them, pls write!
FR David - Symphonie
Petula Clark - L'agent Secret
Katty Line - Tu Vinci Sempre
Posted by Dansmoncafe at 6:45 AM 7 comments: 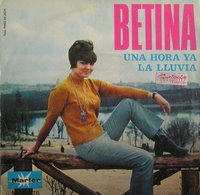 More Betina songs and pictures at Mel's splendid blog I Can't Give You Anything But Love...baby.. with a lot of Spanish yé-yé as

well! Featured a little dedication to my Betina post.. yay!!

PS.... I'm going to London, from October 18th till the 22nd. On my last visit I had a hard time finding record shops with chanson & yé-yé.... anyone knows one?
Posted by Dansmoncafe at 4:16 AM 3 comments: 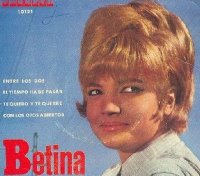 Again, thanks a million to Alan @ La canción de Prévert
Mª de las Mercedes Massager Tarragó (b. Barcelona, January 6, 1950) studied at the conservatory in Barcelona and appeared in several radio contests, where she got the name of Betina.

A blonde with blue eyes, joyful and sensual, extrovert and of an overwhelming charm, in real life as well as on stage, she was very popular in the mid 60s, singing with grace and style, both French and Italian successes, and especially ballads.

Her first record was released in 1964. Her first hit came with the song 'Hay tantos chicos en el mundo' ('There Are So Many Boys in the World'), which made her well known all over Spain.

In 1972 she married the Cantabric pianist Raúl G. Calderón. She then joined the band Janio Martí, very popular in Catalonia, and has continued singing and travelling round Europe in sea cruises (!).

New thread at Get Hip! with interesting ebay retro LP finds.. check it out..
Posted by Dansmoncafe at 5:40 AM 14 comments: 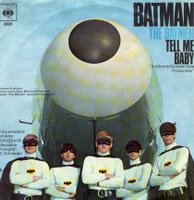 Born and raised in Berlin, frontsinger Dieter Zill spent his youth playing football (soccer). He tried his hand at music, making it as far as supporting Bill Haley, Little Richard and Rolling Stones with his band Didi & His ABC Boys,(he also fronted The Batmen and released an album under the alias Lord Nelson), before deciding in 1969 to change career and started working for German Bravo magazine as a photographer.

Thanks to Tony the Tyger and Bruno
Posted by Dansmoncafe at 12:54 PM 8 comments: 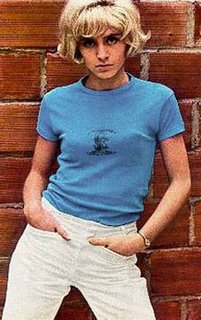 A long biography translated thanks to Alan!:

60's French yé-yé goes beyond F. Hardy, Sheila and S. Vartan. One of these other singers was Ria Bartok. She knew success for two years, then tragedy crossed her way. Such a pity.

She was born in Enben, near Hannover. Her father was an opera singer (not related with composer Bartok, as far as we know). She studied in several european cities, then in the fifties the family established in France and she obtained the title of nurse, but doesn't work in it for much time. In 1963, she signed with the label Ricordi and made her first EP, which included 'Parc'que je revu François', a trepidant version of 'I Saw Linda Yesterday', and her first hit. Then followed a second EP with RCA, and, from the autumn of '63, seven more with Columbia (Emi).

This meant two things: that the records sold well (even if they weren't a big success), and that Columbia had great hopes on the artist, as an alternative to Sylvie Vartan, phisically similar and more energetic.

Jean Paul Guiter, Ria's artistic director, tailored her EP's in the best way of the time: great photo covers and fantastic french versions of Goffin and King ('Chills', 'I'm Into Something Good', 'He's In Town'), Mann and Weil ('Heart'), Leiber and Stoller ('Lucky Lips'), Chris Andrews ('You Can't Blame Him') and other succesful composers. There were also french composers who wrote songs for her. Ria's style developped from American R&B (1963-64) to girl group sound and British pop (1964-65), always with delicious arrangements and with two dancing songs, at least, in every record. 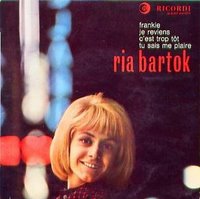 Her best years were 1963 and 1964. Success had eluded her when other artists recorded the same song (this happened two times with Richard Anthony, her label mate). Then in the autumn of '64, 'Et Quelque Chose Me Dit', a version of Herman's Hermits' version of 'I'm Into Something Good', by Goffin and King, went to the hit parade of "Salut Les Copains", and 'Ce Monde' (Cilla Black's 'You Are My World', by Umberto Bindi), released in single by Pathé, a subsidiary label of Emi, was number one in Canada. Then Columbia tried to promote Ria Bartok in the British market, and released 'See If I Care' (an English version of her 'Diggedle Boeing' from '63). It was well received enough for Rita to appear at TV's programme "Thank Your Lucky Stars" (ABC).

There is no happy ending. Columbia was releasing Ria's EPs still in 1965, and all seemed well and promising when she died in a fire which she started accidentally. Although her early death doesn't let us know how would had developped her career, we can enjoy all she made, beacause her complete discography has been beautifully released in CD. 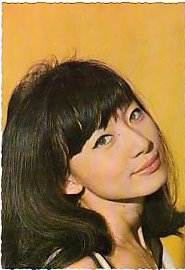 Tiny Yong debuted in asian cabaret-restaurant "La table du mandarin" in 1959 (after making her debut in the theatre, then the cinema and then as a singer) with an exotic setlist from 1960 till 1962, before supporting the cause of yé-yé thanks to Henri Salvador. Her choice of songs is greatly influenced by American girl-groups, from The Shirelles to the Chiffons. From 1963 till 1965 she was one of the favorites of the show "Salut les copains'. In 1963 she even achieved a 5th place in the show's chart behind Sylvie Vartan, Sheila, Françoise Hardy and Petula Clark.
Magic Records released an anthology in 1998.

What a cute voice. These are the only songs I've got. I would love to hear more!

Article about her in French from JukeboxMag - Translation anyone? 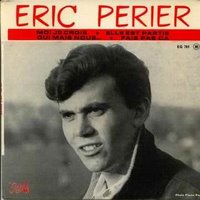 It's impossible to find something about Eric Perier and this very rare French ballad, but it sure is nice!

Update on him from Bruno: (thanks!)
He had a few EP's out circa 63/65 and recorded a cover of 'Stand by me' in Italian 'Preghero' which he used to sing on stage in the sixties with his orchestra during summer outdoors festivals (fetes locales 7days in a row )in all the villages around Nimes and in the south of France. He went on being an orchestra leader during the 70's and 80's even 90's. He must be around 65 now if he's still alive. Anyway his orchestra still exists in Nimes (30000)whether it's been sold to another musician I don't know but if you type' orchestre eric perrier' on Google you'll find infos+ address and places where they played in 2006. Last thing his real name is Mario Pace.