Interview with a yé-yé girl; Jacqueline Taïeb
Copyrighted by Sofie J, thanks.

This is a mail interview, so I am in lack of abilities. Hope you bear over with that, and I am looking forward to hopefully meet Miss Taïeb in a near future and do a complete interview with her.

Tunesian born Jacqueline composed her first songs aged 12 and recorded her first disc "7 heures du matin" for Impact records when she was 18. Her songs combined Arab, European and American influences. Her sixties ep's are highly prized for their garage sound. With her strong vocals, and talent for pop melodies, Jaqueline's songs are real gems that still sound fresh today. 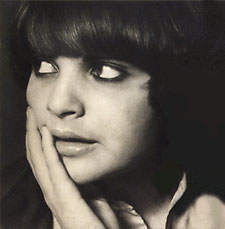 The Beginning
‘Music caught my soul before I was born’.
It was summer of 1966. Jacqueline was playing her guitar with her friends when a showbiz woman heard her singing ‘7 heures du matin’ (which later became her giant breakthrough). She immediately saw the talent and opportunities in her, and gave Jacqueline her card.
Afterwards Jacqueline went to see her in Paris, and she was introduced to the team she was going to work with.

'I wish I had Paul McCartney, to help me... '
The rest is history. 7 Heures du Matin was a hit, and still has a cult status of a real yé-yé to this this very day.
‘I think the success of this song is the result of a total identification to it. Waking up at 7 AM is a torture for so many people. Jean Bouchetty, who produced all my sixties vinyl & the English musicians who played on them added the final touch of rock rebellion.’

True, the song is about a teenage girl (clearly herself) getting-up in the morning to do her thing, but also dreaming of idol Paul McCartney helping her with her English homework.
- ‘I 'm still a Paul McCartney fan & now I’d love him to help me write my songs!’

The Writer
After that, she took a break from her career and began to write for other musicians. Famous artists such as Yves Montand, Michel Fugain, Fabrienne Thibault and Stone have all sung Taieb’s songs. The list goes on. However, she does not feel any pride.
- ‘I only feel joy. Besides, how could I choose one song over another? They all are my children.’

However, that is not completely true. In 1988, she wrote the international hit ‘Ready to follow you’, sung by Dana Dawson. The single sold more than 500.000 copies, and the album 300.000 in France. Furthermore, the song has been released in more than 30 compilations.
- ‘When I think it over, then yes I am proud of that: ‘Maybe because it was I who discovered her in New York in 1988, while the other artists were already very famous.’ 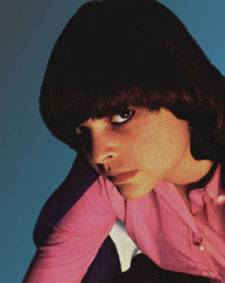 Nowadays
This April, Jacqueline played a live gig in Amsterdam Beat Club. But how is it to play a 40-year old tune? Moreover, discovering to still have so many fans?
‘The Amsterdam gig was great! People are so friendly & crazy in Holland.
I love this mixture. Yes, it did surprise me! Having so many friends all over the world makes my heart sing.’

And what music makes her heart sing?
- ‘So many different artists! Rock, blues, R&B, jazz, funk... Everything from Yves Montand, Stevie Wonder, Elvis, and Edith Piaf to present music like Alicia Keys, Keane and Eminem (!)

Last year she released a new album called ‘Jacqueline is back’, including ten new songs, the famous ‘7 heures du matin’ and a hilarious new version of it with John Lenine.
Jacqueline calls her new album ‘Pop with crazy lyrics’.

Following the success at the Beat Club in Amsterdam, she was booked for another gig at the club, on September 23rd.

And not only that, there will be a big surprise for the 40th birthday of " 7 h du mat" in January 2007:
JACQUELINE TAIEB & THE AMSTERDAM GUYS .
An EP with 7 heures du soir, 7 PM, Partir à Amsterdam and Juste un peu d' amour.

Last week Pitchfork released a list of their opinion on the top 200 songs of the 60's. First place went (well-deserved) to Beach Boys for 'God Only Knows'.
1. The Beach Boys: "God Only Knows"
I'm sure you've read these: "the world's greatest song," "Brian Wilson's masterpiece," "the most beautiful piece of music ever recorded." Yes, the initiation into the Museum of Western Popular Music is always rough, as credible historians rush to summarize our collective experiences in short phrases. But for better or worse, "God Only Knows" is the kind of song that's almost impossible for me to talk about divorced from the way it makes me feel: sad, in love, honestly grateful, but also a little hopeless. Even in mono, it's like being swept up by a wave of

compassion but still getting bruised.

The first words Carl Wilson sings, "I may not always love you," are already uncertain, so if you need a tie into the legacy of 1960s youth culture, glance no further than the naïve but strained optimism locked inside this song. Yet, Carl made this uncertainty sound gorgeous. The voices that sail behind his might just as well be a quartet of violas and cellos playing counterpoint that'd already been obsessed over a few times before they got it. "God Only Knows" is so ideally conceptualized and realized, critics can't help but support it. Somehow, even that can't turn it into an art exhibit; its humanity resists the attempt. To me, this song is a goodbye to being a kid, and hoping that love actually is the answer. And almost nobody knows if it is. --Dominique Leone

Claudine Longet - Nothing To Lose 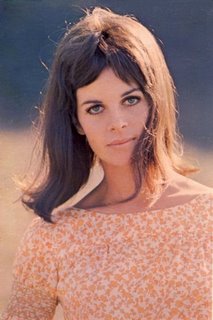 Here is the hard-to-find song by Claudine Longet from the Blake Edwards film The Party (1968) starring Peter Sellers. Such a hilarous movie!
Claudine Longet - Nothing To Lose
Watch the clip on Youtube 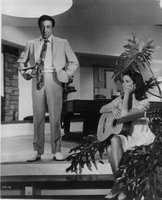 Posted by Dansmoncafe at 1:26 PM No comments: 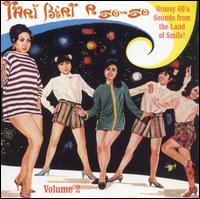 A strange cover of Serge Gainsbourg's 'Je T'aime Moi Non Plus' by The Traces, 60's band from Thailand.

NB! Look forward to my upcoming interview with a well-known yé-yé girl.. in a couple of days!
Posted by Dansmoncafe at 12:16 PM 1 comment: 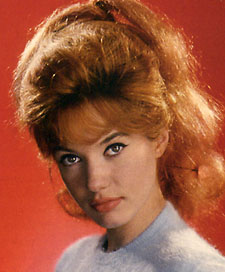 I just got a counter up, and wow, I can't believe I have that many visitors. Where are you all hiding? :)

Born 5 June, 1946
(Cairo, Egypt)
Her parents were English. 3 EPs in 1960 on Barclay, including one duo with Eddie Constantine (Aimons Nous), and another one with Eddy Mitchell & Les Chaussettes Noires (C'est bien mieux comme ca). Then she moved to AZ records, trying to sing her own compositions. Failure... She also played second roles in different movies (Blow Up...) (from the yé-yé girls website)

Barbara Feldon (born March 12, 1932 in Pittsburgh, Pennsylvania) is an American actress and model.

She was most famous for her character Agent 99 in the television comedy series Get Smart, starring with lead Don Adams. When she was cast for the role, she was previously famous, although anonymously, appearing on a tigerskin rug in an advertisement for Top Brass dandruff cream. For performance in Get Smart she was nominated for an Emmy award for 'Outstanding Continued Performance by an Actress in a Leading Role in a Comedy Series' in 1968 and in 1969.
In a smoldering role designed to parody all those James Bond sex kittens, Feldon's character--a spy for the freedom-fighting agency Control--was anything but ornamental.

The coolest (and only?) girlspy-song Barbara Feldon - 99

NB! The radioblog has been updated...
Posted by Dansmoncafe at 4:11 AM 4 comments:

Another great song from Jiji.. Now I only need the songs 'Cinderella' and 'Non, mon ami' from her only EP 'Cinderella'

Posted by Dansmoncafe at 9:30 AM 3 comments:

Vanessa and The O's 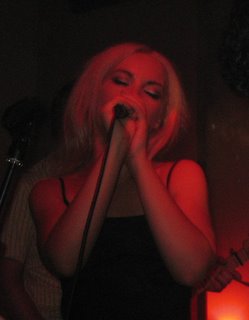 I saw Vanessa and The O's live in concert July 24th. Mono Taxi & The Lovers also played. Bob Stanley from Saint Etienne was the DJ. What a wonderful, french night. A lot of Yé-yé music was played as well!
Vanessa & The O's - Stand
Vanessa & The O's - Bagatelle

More pictures and a videoclip @ Get Hip! Forums

Read biography
Vanessa and The O's at Myspace


Go the Bruno's blog to download 'Les Gemeaux'
Ariane on the Yé-Yé girls website
Posted by Dansmoncafe at 8:40 AM 8 comments: 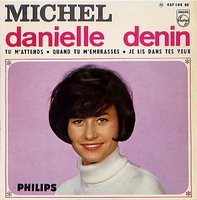 Great song from an unknown yé-yé girl.. anyone have info on her?

Track is on Ultra Chicks vol. 4
Posted by Dansmoncafe at 1:49 PM 3 comments: 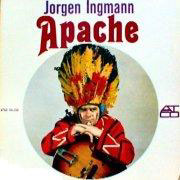 Someone requested this a long time ago, so here it is!

Jørgen Ingmann, originally a jazz guitarist from Denmark, also produced a cover version of Apache that, billed to Jørgen Ingmann & His Guitar, made it to number 2 on the US pop chart and 4 in Canada in 1961, thereby preventing the Shadows' original from charting there.
A real classic.
Posted by Dansmoncafe at 2:13 PM 3 comments:

If someone has info on her, please write.
Posted by Dansmoncafe at 1:36 PM 1 comment: 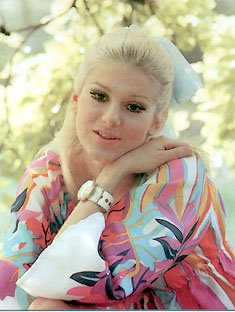 Im home. London was great. France was great. I am too tired to give you a recap of my trip, and I like to keep it as private as possible.
I have some pictures from V&A's 60's fashion exhibition and videos and pictures from the Vanessa & The O's concert. In a few days.

Peggy March - Doktor
Born 8 March 1948 in Lansdale Pennsylvania (USA).
Having studied singing, acting, and dancing in the USA, Peggy's first record "I Will Follow Him" made No. 1 in the US Hit Parade. Her European debut was at the 1963 Radio Exhibition in Berlin. She appeared in Germany again in 1964, making 15 TV appearances. In 1965 she entered the German hit charts with "At Seventeen I Still Dream". After a golden record in 1968, she made 3 appearances in Japan. In 1969 she moved from New York to Munich with her husband and manager Arnie Harris. In 1970 she did a 45 minute television show in Germany. Her commercial success in Germany continued through much of the 1970s. In 1979 she experimented with disco on the album, Electrifying, but it failed to achieve commercial success. By 1981 record companies did not renew her contracts, and she moved back to the United States. A retro fad in Germany brought her some continuing success starting in the mid-1990s. Currently she works largely in the Las Vegas music scene.

Thanks to Easytempo, who help me via Get Hip! Forums
Posted by Dansmoncafe at 1:24 PM 3 comments: