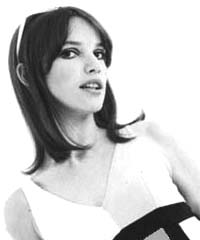 Zouzou (born November 29, 1943 in Blida, Algeria - real name is Danièle Ciarlet) is a model, actress, singer and icon of the 60s and early 70s mostly known for her beauty and for her lead role in Éric Rohmer's Love in the afternoon.

Discovered at age 16 by then young design artist Jean-Paul Goude, she briefly modelled for Yves Saint Laurent, and, as a tireless night-clubber, is better known, in the mid-60s, under the nickname "Zouzou la twisteuse". Shortly after that, she was romantically involved with Rolling Stones member Brian Jones, whom she followed around the world. She was also a good friend of John Lennon and George Harrison and was photographed by Richard Avedon and Helmut Newton, got to meet Bob Dylan, Andy Warhol and most of all, Jack Nicholson who was, along with Marianne Faithfull, 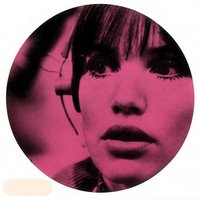 very... faithful friends. She also recorded two EPs as a singer at the end of the 60s, and a duet with Dani, another French 60s icon. After a few roles in underground and experimental French films (under the direction of Philippe Garrel or Yves Lagrange), she got a cinematographic breakthrough in 1972 with Eric Rohmer's L'amour l'après-midi, and developed an international career as an actress, a career which unfortunately, and progressively, slowed down because of her addiction to heroin. She spent seven years on the Cariibean Island of Saint Barthélémy so as to shape up, but her return to Paris, in the mid-80s, was followed by two jail incarcerations due to mild drug dealings. In the mid-90s, she was drug free at last, and, to get a fresh start, she sold the newspapers "La rue" and "Le réverbère" (the equivalent of British "The Big Issue") in the Parisian metro. In November 2003, an autobiography entitled "Zouzou jusqu'à l'aube" ("Zouzou until Dawn") was released, where she told with an ultimate honesty the extreme ups and downs of her incredible life. A compilation of all her songs was also released, and a documentary, "Zouzou l'héroïne", told in images the fate of probably one of the most beautiful woman of the world, revered as the "female Marlon Brando" when she burst into the Parisian scene, more than 40 years ago. 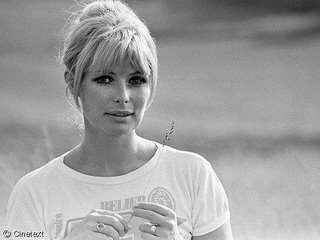 She started as a hairstylist but ended it to pursue a modelcareer, with great success.
She was soon known as the first Danish teenager, and recorded some albums for Phillips in 1958-1958, but not with the same impact.
More success had she with some Danish films, though she was not the biggest talent.

In 1960 she got a music contract in Germany, and became a popular tv-host. Bach and Dietmar Schönherr were the hosts of a controversial German television program in the late 60s famous for nearly drowning an entire family is a staged car accident but nevertheless managed to score a chart hit with this bizarre, cheerfully arranged single endorsing radical leftist politics and terrorist tactics. It's a pretty fascinating relic from the era, to say the least.
Since then she became a tv-producer in Germany, but visited Denmark regularly to perform and record Danish records in 1970's.
Today she share homes in Schweiz and on Ibiza with her husband Dietmar Schönherr. 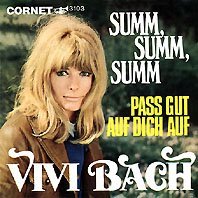 In Denmark she is more known as an icon and a small actress than a singer. It's actually pretty hard to find her Danish records, but if you can't get enough of Vivi's german records, look her up at ebay.de

More photos of Vivi at my new Photo Album!
(I guess being sick, make me incredibly active on the blog)

So, here is a zillion songs. I couldn't choose. They are all so good!
If you are new to Vivi, then check her and husband Dietmar Schönherr's hip "Molotow Cocktail Party" which is featured on the 'In-Kraut Hip Grooves in Germany' cd. I have a couple more songs by her, but tell me what you think of these first! 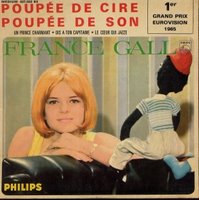 Here is a list of covers. If you have some, please write to me in the comments!
Wikipedia:
Poupée de cire, poupée de son (Wax doll, bran doll) was the winning entry in the Eurovision Song Contest of 1965. It was performed in French by France Gall representing Luxembourg.
The song, composed by Serge Gainsbourg, was the first non-ballad to win the Contest and is generally agreed to be one of the great Contest entries.

The word son in the song title has frequently been misunderstood, especially by English-speakers, as meaning "sound", and this has led to several attempts to explain poupée de son as having to do with a singing-doll toy. There is, however, no evidence that a toy of this kind (une poupée qui chante) has ever been called a "sound doll" in French.

Son in this context is an entirely different word, meaning "bran" (or sawdust, resembling bran), of the kind used to stuff children's flopy dolls. Poupée de son is a long-standing expression in French; it is also used in the expression Syndrome du bébé "poupée de son", "floppy baby syndrome" (infantile hypotonia), and can even refer to someone too drunk to stand up. "Bran doll" as a phrase is not entirely unknown in English either: "no more brains or backbone than a bran doll"

Coverversions of Poupée de cire, poupée de son in other languages include:

Thanks to Alan!
Posted by Dansmoncafe at 8:47 AM 32 comments: 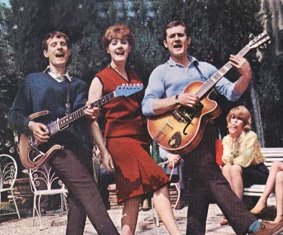 It was a game of words between the initials of Tim, Nelly and Tony; the names of the members of this excellent trio.
They were of Italian origin, but were discovered when they performed in Uruguay. In 1960 they made a contract with RCA. Their first LP sold more than 100,000 discs single in Argentina, in addition to being success in Mexico and most of South America. 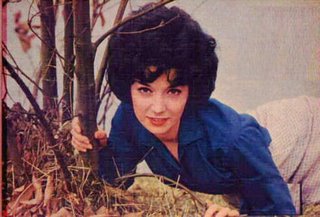 Patricia was an Italian yé-yé girl, who used to live in Belgium, before moving to France in 1963. Signed to the Bel-Air label, she got a hit with her second EP 'Demain Tu Te Maries'. Her song 'Non ho l'eta' per amarti' was entered in the 1964 Eurovision Song Contest and won the grand prize at the San Remo Festival in the same year. After recording a handful of singles, Patricia, who wrote most of her own material, stopped performing and became a successful writer for other singers (Nicoletta, Dalida, Claude Francois, Annabel Buffet...) 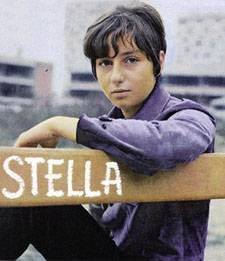 Stella, born into a Polish Family, was 13 when she recorded her first EP. Between 1963 and 1969, she recorded 9 EPs, 2 singles and an LP (also issued in the US). Her songs were always funny and ironic. Her uncle Chorenslup used to write her lyrics, he was to her what Jacques Lanzman was to Dutronc (Jacques Dutronc, Françoise Hardy's husband, is one of the best sixties' French singers). 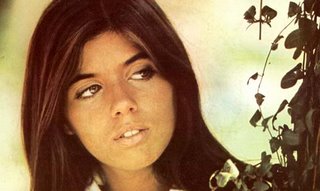 Jeanette Dimech (October 10, 1951 - ), who performs under the name Jeanette, is an English-born, American-raised singer who has resided in Spain since the age of 12, and who sings primarily in Spanish.

Her greatest success "Porque te vas" (Because you are leaving) was actually written by José Luis Perales and remained relatively unknown at the start of 1974. Only when the song was used in Carlos Saura's 1976 film "Cria Cuervos" (Raise Crows), and the film went on be honoured at the Cannes film festival (Jury grand prize) and the Berlin Film Festival (jury special prize), did the song become internationally known and a hit. In Austria it reached number 13, in Switzerland number 4, and in Germany it even reached number 1. In Japan, obsessive pop music enthusiasts called her the "whispering Lolita" and her records are usually filed under French Yé-Yé or Sixties Pop.

Although after "Porque te vas" Jeanette never achieved similar international success, she continued singing relatively successfully in Spain (and to a lesser degree France) well into the 1990s. 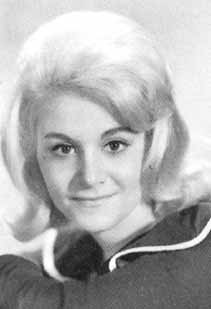 
Bernadette Carroll - Hero (1965) (picture)
This song makes "Leader Of The Pack" seem like a nursery rhyme.

Connie Francis knows how to twist! 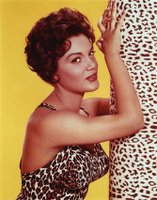 This one is hell of a bossa nova number. Her voice is like runny sweet toffee or something just as yummy. It's a very simple record, extremely catchy and Connie sounds very at home singing and talking in half Brazilian and English. 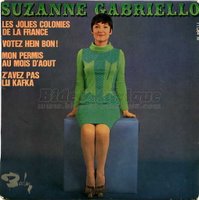 Suzanne Gabriello, a french singer/actress, became famous for her passionate affair with belgique cult chansonier and actor Jacques Brel. After 5 years the pair seperated and Brel composed a song for Gabrielle, which became one of his greatest hits: "Ne me quitte pas?". Suzanne Gabriello died in 1992 of cancer. She was 60 years. 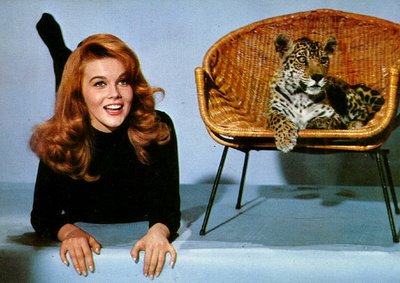 Of all Elvis' leading ladies, Ann-Margret will always be Number One. Not because she was the sexiest, or the best actress (although she certainly qualifies on both counts!), or because "Viva Las Vegas" was that great of a film (but for an Elvis film, it's pretty good!), but because the on-screen chemistry between them was NOT ACTING. It's probably why Viva Las Vegas is still one of the best-remembered of both Elvis' and AM's films. Watching the film today, what comes across is two talented stars at the peak of their confidence, enjoying each other's company, and having fun! And that's pretty much what was happening off-screen, too! 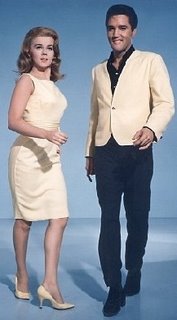 Ann-Margret (born April 28, 1941), a Swedish-born actress and singer, was born Ann-Margret Olsson in Valsjöbyn, Jämtland, Sweden. She moved to the United States when she was young and grew up in Wilmette, Illinois. She attended Northwestern University and was discovered singing in a nightclub by George Burns. She was often referred to as a "sex-kitten" and the "female Elvis".

What an incredible sexy voice she has.. what do you think.. shall I post more of Mrs. Elvis? 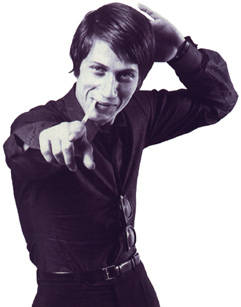 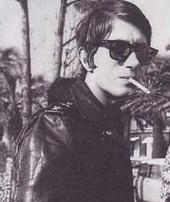 In the early 70s he began his screen career collaborating with such directors as Godard, Zulawski, Lelouch and Pialat. For his unusual portrayal of Vincent Van Gogh in Maurice Pialat's 'Van Gogh' he was awarded Cesar in 1992. He continues his musical career and in 1995 he recorded the new album called 'A part ca'.